There’s a scene in Netflix’s travel-environmental show Down to Earth with Zac Efron, where the actor and his companion Darin Olien have just emerged on the French side of the Channel Tunnel. They’re both feeling lethargic and a bit grouchy, so Olien decides to spontaneously take his shoes off and run around a grassy knoll. Efron thinks he’s crazy and yells at him to get back in the car, but Olien insists that Efron join him, and — he stresses this point — take off his shoes.

Olien, the host of a popular wellness podcast, and the best-selling author of SuperLife: The 5 Simple Fixes That Will Make You Healthy, Fit, And Eternally Awesome, says: “I want to get my feet on the ground … Don’t you feel like you gotta just, get connected? Gotta get the electromagnetic connection to the earth again. It’ll help your circadian rhythm.” As the guys prance around in the pasture, Efron chimes in with a voiceover: “The idea of grounding is that in order to combat your jet lag, you reset your internal clock by connecting with the magnetic field of your new time zone.”

It’s an imaginative argument, backed up by convincing imagery. At the end of the vignette, with fairy tale French huts poking out from the grass in the distance, Efron and Olien are happy again. “Guys, we’re going to Paris!” Efron cheers. All told, it’s one of the least subtle endorsements of a wellness trend that’s been picking up steam for over a decade now: earthing. Also known as grounding, it’s the idea that “walking barefoot, sitting, working, or sleeping outside [will] transfer the Earth’s electrons from the ground into the body,” leading to benefits like better sleep and pain reduction.

Americans, like most people, spend an astonishing amount of time inside. According to the Environmental Protection Agency, the average American spends 93% of their life indoors. Unsurprisingly, the overwhelming majority of that time (86%) is spent inside buildings. But the other 6% is spent in automobiles. Which means — yes, this is a real statistic — Americans spend just one percentage point more of their lives outdoors than in a car.

In recent years, just as the country’s mental health crises have spiraled out of control, dedicated “ecopsychologists” have done yeoman’s work linking immersion in nature to improvements in well-being. One study, which took into account “different occupations, ethnic groups, people from rich and poor areas, and people with chronic illnesses and disabilities,” found a rather consistent conclusion: when people make time for just two hours of outdoor time a week, physical, mental and emotional health all head in the right direction. Another illustrated nature’s ability to induce calm and lift moods.

This is one important direction — among many others — that mental health research is headed, and it’s hard to argue with it. Urban planners are planting vertical gardens, employers are encouraging daily constitutionals, Brits are jumping in freezing cold lakes. There are organizations like Park Rx America, and the Association of Nature and Forest Therapy Guides which “prescribe” nature to people who are hurting, yet could use a hand in jumpstarting their outdoor routine.

That’s all to say — the sun, the trees, and yes, the grass, all seem to be pretty damn effective at making us feel better. But does that necessarily mean that we should start earthing? Well, that might depend on exactly what you’re hoping to achieve from earthing. If you’re talking to Clint Ober, the father of grounding, he would stump for “normalizing” the function of bodily systems through the flow of electrons. The general idea is that rubber shoes and concrete buildings have put too much space between our bodies and the Earth’s electrical circuit, and that once we remove those obstacles, we perform better.

According to Ober, “the body utilizes the earth’s electrical potential to maintain its internal electrical stability for the normal functioning of all self-regulating and self-healing systems.” The root of this contention is that human beings walked barefoot for hundreds of thousands of years, benefiting from barely-discernible electromagnetic impulses between terra firma and the skin. Grass counts, dirt counts, sand counts. The Earthing faithful like to call it vitamin G (“G” for ground), and firmly believe that the body’s free radicals are actively in need of the planet’s unpaired valence electrons.

Is any of this legit? Not according to Dr. Mubashar Rehman, a pharmaceutical scientist who has authored more than 30 articles with leading medical publishers like Elsevier, Royal Society, Nature Publishing, and Springer. “The planet isn’t a giant electric battery, nor are living things,” he tells InsideHook. “In this regard, the idea that there are loose electrons lying in wait on the bare earth in some special way to connect with you and heal you is rather nonsensical. The idea that our bare feet can somehow act like special connectors to some mystical current flow is similarly false.”

Christopher Mims, writing at the time for MIT Technology Review, had similar thoughts: “What Earthing is really about is anxiety over our increasingly technological society, which is as old as civilization itself. And you’ll never go broke preying on that sort of fear … Somehow a paper “validating” the pseudoscience of Earthing made it into PubMed — via the Journal of Alternative and Complementary Medicine. Naturally, the study lacked a control group or any attempt to blind researchers to the experimental conditions.”

While Mims wrote those words nine years ago, the practice’s popularity hasn’t exactly gone away. Most recently, The Boston Globe wrote a profile on Boston Red Sox pitcher Adam Ottavino’s pre-game warm-up, which includes earthing in Fenway Park’s outfield grass. Ottavino said: “Basically, I’m just trying to connect with the environment I’m going to be in every day and it just kind of helps.” The piece stops short of questioning the practice, and offers links to a couple studies that have endorsed earthing, one of which concludes with the following words: “Contact with the Earth may be a simple, natural, and yet profoundly effective environmental strategy … [and] an essential element in the health equation along with sunshine, clean air and water, nutritious food, and physical activity.”

And this — if you’re somehow not there already — is where it gets difficult to take earthing seriously. Ultimately, while it conveniently remains “too soon” to roundly prove or exhibit the ways in which Mother Earth and the human form bounce electrons off each other, there is proof that walking around barefoot fights inflammation and stress. But then, earthing research is essentially just cherry-picking research done by eocpsychologists, to link outdoor immersion with improved physical, mental and emotional health.

It wouldn’t be that frustrating if not for the fact that Ober (who has been on Olien’s podcast, by the way, and has also written for goop), is not just a prophet. He’s a salesman. When Mims wrote “you’ll never go broke,” he was referencing Ober’s official Earthing line of ground mats, sleep pads, wrist or ankle bands, adhesive patches that can be used inside the home or office, and footwear, “which are connected to the Earth via a cord inserted into a grounded wall outlet or attached to a ground rod placed in the soil outside below a window.” Don’t hurt your brain trying to figure out how any of it works. Just know that you can bring home a starter kit for $476.

It seems almost too bold a play — to formulate an entire scientific theory around the importance of ditching our rubber shoes and concrete buildings, and then create products that allow customers to spend more time in rubber shoes and concrete buildings. But it’s also (unfortunately) pretty standard for the pseudoscientific consumer wellness market. In the course of researching this piece, I found another study that raved about the powers of earthing in healing open wounds at accelerated rates, complete with progressive photos of the recovery process. At the very bottom of the study, there is a disclaimer:

If you enjoy taking your shoes off at the park, continue to do so. Continue to go to the park as frequently as you can. No, the grass won’t turn you into Avengers superhero. But it — plus the sun and the trees — could very well put years on your life if you continue the habit. And isn’t having some sort of control over the amount of time you get to hang around on this planet (with your kids, and their kids) a superpower in itself? Science is exciting, but wellness is often actually pretty boring, and that can be a good thing. It means you don’t have to search too far, or sift through purposely complex studies in order to find the right answers. Next time you’re having a long travel day, do leave the car and run around in the grass. It might not fill you up with electrons, but it’s a great way to recharge nonetheless.

This article was featured in the InsideHook newsletter. Sign up now.

Mon Jul 19 , 2021
One of the things Royal Caribbean worked on during the 15 month shutdown was revamping its fleetwide beverage menu. Across Royal Caribbean’s ships, the base menu for cocktails, mocktails, and low/no alcohol drinks has been updated. Rest assured, all of your favorite, typical vacation cocktails are still available, such as piña […] 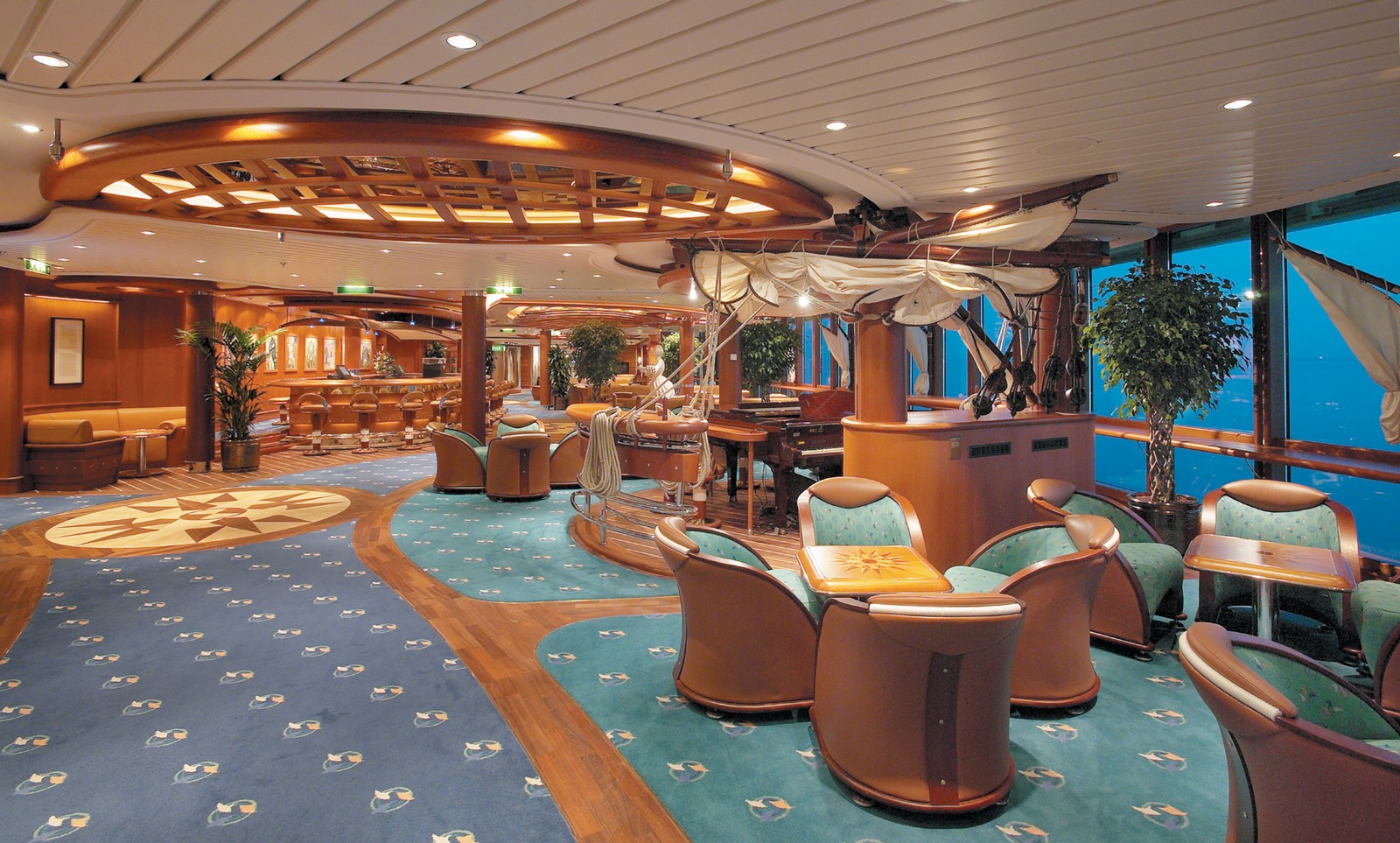