Arizona’s culinary influences range wide, from its rich desert geography to its deep history with the Mexican border state of Sonora. Many communities call Arizona home, including more than 20 different Native American tribes, immigrants from around the world and out-of-state transplants chasing the sun. All together, they have shaped Arizona’s vibrant blend of Southwestern cuisine.

In larger cities, you will find a wonderland of international restaurants serving everything from Peruvian ceviche to Jamaican braised oxtail and Korean corn dogs. Phoenix is also peppered with regional chain restaurants from around the country, such as a famed Chicago chicken shack and outposts of a beloved New York City food cart. Chefs at fine dining restaurants are exploring new ways to celebrate local ingredients and are earning national acclaim in the process.

Amid all of these exciting dining options, there are a few dishes that remain quintessentially Arizonan, for residents and visitors alike. From Navajo fry bread to prickly pear margaritas, chimichangas to Sonoran hot dogs, these 10 dishes are essential Arizona eats.

Food for thought: Phoenix’s food scene is on fire. Why chefs say it’s time for change

Arizona burritos are a meaty treasure. Unlike the Mission-style burritos you’ll find in a place like Chipotle or at many burrito shops in California, ours keep it simple with just a scoop of meat, like carne asada, carnitas or spiced pork adobada, and perhaps a little cheese or guacamole wrapped in a fresh flour tortilla. You won’t find rice, sour cream, lettuce or other ingredients packed in, because Arizona burritos kick-it old school, reflecting the ones brought from the northern Mexican states of Sonora and Chihuahua in the 1900s by migrant farmworkers who needed a protein-packed, filling meal to get them through a hard day of work. Try one from any of our 24-hour Mexican joints, like Filiberto’s or its counterparts, Riliberto’s, Aliberto’s or Los Betos. Just make sure you’re hungry. And don’t forget to order a side of hot salsa.

Good things happen when you take a burrito and deep fry it. A crispy-fried tortilla surrounding chopped or shredded meat is a central part of the menu at most sit-down Mexican restaurants in the state. The chimichanga’s contested origin story just feeds into the lore of the dish. It’s true that it may have been invented in Mexico, where it’s about the size of an egg roll or a flat square that’s topped with mayonnaise and chopped tomatoes, but several Arizona restaurants also lay claim to its creation, including Phoenix-based Macayo’s and the historic El Charro Café in Tucson. As the story goes at El Charro, founder Monica Flin accidentally dropped a burrito into the fryer one day and began to mutter a famous Mexican curse word. No matter where it came from, the Arizona chimichanga is now a local staple, especially when it’s smothered in red or green chile sauce.

The Sonoran dog is Arizona’s answer to New York and Chicago dogs. Wrapped in bacon and the bun stuffed with pinto beans, onions, tomato, mayo, mustard and jalapeño salsa, the Sonoran dog is a fusion of American pork products with vibrant Mexican flavors. Originally invented in Sonora’s capital of Hermosillo where they were sold at baseball games, the dogs made it up to Arizona in the ‘90s and were popularized by competing Tucson vendors El Güero Canelo and BK. In 2018, El Güero Canelo made history by receiving a coveted James Beard Award in the America’s Classics category, solidifying the hot dog’s iconic status. While the recipe can be tweaked with add-ons like Hot Cheetos and nacho cheese, the best Sonoran dogs tend to be traditional ones found at roadside carts in most Arizona cities. They’re even better when they come with a toasted yellow chile güero and a green bulb onion on the side.

Ask a local: A Sonoran dog was named best in the nation. But this one’s better

Eegee’s is a Tucson-based chain of sandwich shops known for its icy fruit drinks that go by the same name. The texture of an Eegee is a cross between a slushy and an Italian ice, but the flavors can get more creative with lemon, strawberry and piña colada options along with the ever-changing “flavors of the month” that have included the likes of mango tango, orange dream and galactic grape. The name is a combination of the initials of founders Edmund Irving and Robert Greenberg, who started selling their iced creations from a food truck in the early ’70s. Today, Eegee’s has dozens of locations across Tucson and Casa Grande, and recently opened a Valley location in Gilbert.

I might get banned from Tucson, but I have to say it: I don’t love Eegee’s. Here’s why

Although Mick Jagger popularized the tequila sunrise on the Rolling Stones’ 1972 tour, a fun fact that many may not realize is that the tequila sunrise cocktail was reportedly created right here in Phoenix many years earlier. According to the story, in the 1940s, bartender Gene Sulit worked at the Wright Bar inside the Arizona Biltmore Resort. When a customer asked for a refreshing tequila cocktail to beat the Arizona heat, Sulit mixed up a colorful cocktail with gradient colors, like a sunrise, hence the name. The original tequila sunrise had no orange juice or grenadine in sight; instead, the cocktail was made with black currant liqueur crème de cassis mixed with tequila, lime, ice and soda water. The classic is still available at the Arizona Biltmore resort bars and swimming pools where guests can sip a tequila sunrise poolside.

History in a glass: The Arizona bar where the tequila sunrise was invented

Cheese crisps are widely acknowledged to have been created in Arizona. The bar snack consists of a flour tortilla sprinkled with shredded cheese and griddled until crispy. It can be served as is or spruced up with onions, chiles or other toppings before being sliced to share. One classic option includes strips of green chile spread out in a star pattern across the melty cheese. Their exact point of origin is disputed, but likely contenders include El Charro Café Mexican restaurant in Tucson and Macayo’s Mexican Food in Phoenix. Teepee Mexican food, an old school Phoenix spot with a storied history of its own, offers three different versions.

Little stands at the airport are filled with bright boxes of prickly pear candy and bottles of luminescent pink syrup, as the sweet cactus fruit has become synonymous with desert vacations. And while the candies can be a treat, most locals forgo them in favor of prickly pear drinks from sour beers to fuchsia cocktails. Many restaurants serve hot pink prickly pear lemonade, a refreshing summer sipper, and for those looking to add a little agave to their Southwestern drink, prickly pear margaritas are a favorite at Mexican restaurants. Look for the golf ball sized purple fruits, called tunas, at farmers markets and grocery stores from late summer through early winter.

A typical Navajo taco — also called Indian taco — swaps tortillas for fry bread, and is then layered with beans or bean chili and topped with ground beef, lettuce, tomato, onion and cheese. Though not exclusive to Diné people, these tacos are a staple at fundraisers, powwows and roadside stands for Arizona’s Indigenous communities. One spot on the Salt River Pima-Maricopa Indian Community is even called The Stand. Fry bread itself is an iconic food — a golden-brown flat bread that’s fluffy on the inside, and fried crisp on the outside. But it’s also a food born from trauma and one with which some Indigenous people have a complicated relationship. In the mid-1800s, the U.S. forced Diné people from present-day Arizona to walk 300 miles into present-day eastern New Mexico, where they had to live on land where they couldn’t grow their traditional crops. The government instead left them with flour, sugar, salt and lard, ingredients that would later be used to create fry bread.

Delectable: This Diné chef is opening a fry bread restaurant in downtown Mesa

Mesquite pods were a food source for centuries for Indigenous people in the Southwest, who ground them into flour. The long, flat legumes grow on mesquite trees native to Arizona’s deserts. They’re ready to harvest when they ripen to yellow in the summer and can be milled into a sweet and nutty flour, used for everything from pancakes to pasta. While it’s an uncommon pantry item nowadays, local chefs and bakers are finding new ways to use the mesquite flour. Perhaps most famous are the mesquite chocolate chip cookies from Scottsdale bakery Super Chunk Sweets & Treats, which have won local and national awards.

Sometimes described as the unofficial “state salad,” the Original Chopped Salad has a cult following among food enthusiasts in metro Phoenix. It consists of chopped arugula, smoked salmon, pearl couscous, pepitas, asiago cheese, dried sweet corn, marinated Roma tomatoes and buttermilk herb dressing. It was popularized at least 20 years ago at the now-defunct Old Town Scottsdale restaurant Cowboy Ciao, where it was known as the Stetson Chopped Salad. A 1984 article from The Arizona Republic mentions an even earlier iteration served at Steven, another now-closed Scottsdale restaurant. Chef Bernie Kantak updated the dish while working at Cowboy Ciao, and now the Original Chopped Salad (or variations of it) can be found on menus around the Valley.

One Major Effect of Drinking Coffee on an Empty Stomach, Says Science

Tue Sep 21 , 2021
It’s safe to say that when a Monday morning rolls around, there’s nothing quite like sipping on a cup of coffee to wake you up. In fact, sometimes it feels so important that you head straight for the coffee pot before drinking water or eating breakfast. But for those who […] 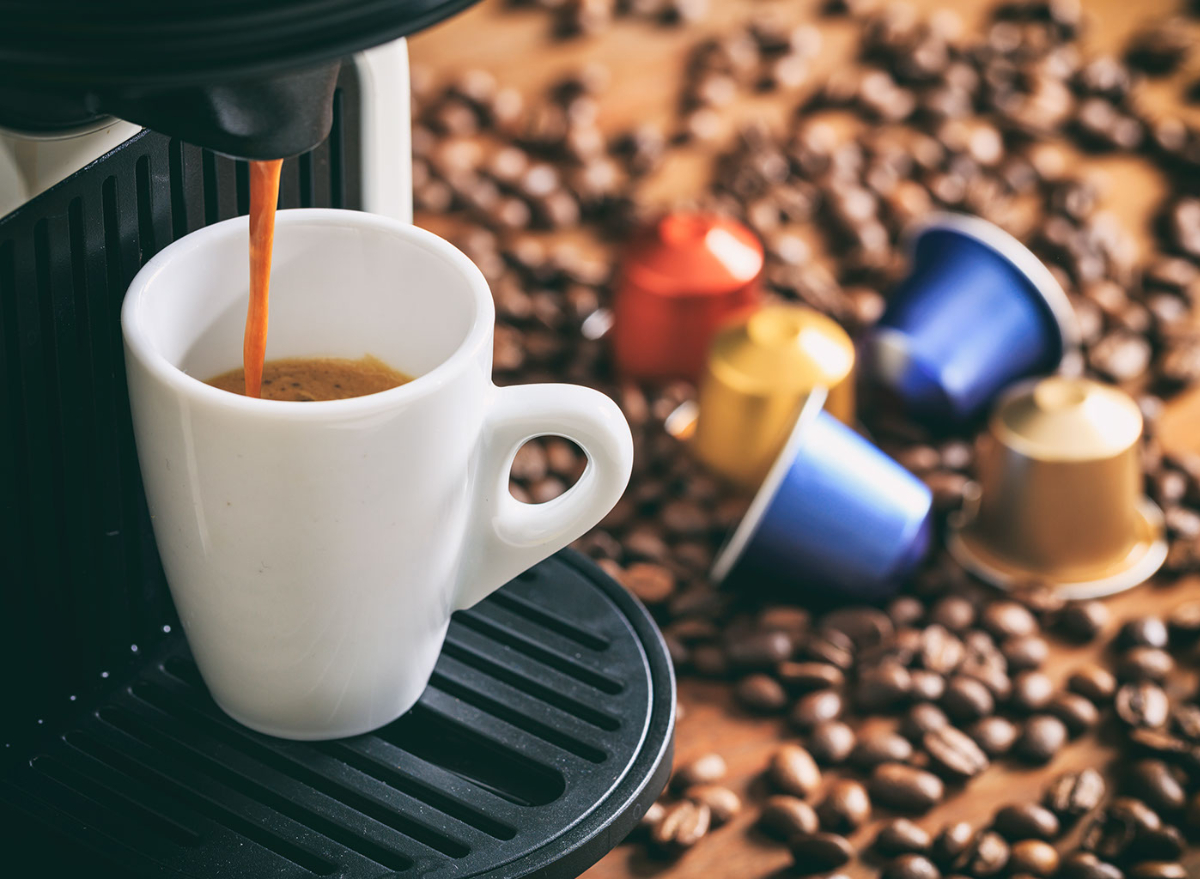