Los Altos food hall State Street Market, arguably the most notable restaurant project the Peninsula has seen in years, opened today with a host of big name chefs and restaurants headlining the establishment.

Silicon Valley entrepreneur Anne Wojciki’s development firm, Los Altos Community Investments, is behind the market, which they hope will become a major Bay Area dining destination, much like San Francisco’s Ferry Building or Napa’s Oxbow Public Market. Additionally, the developer partnered with Bon Appétit Management Company, a massive restaurant management company based on the Peninsula, to create several stands inside the market. These restaurants and bars, whose menus were developed by Bon Appétit culinary director Robbie Lewis, were the first to open on Tuesday.

For now, the 20,000-square-foot space is only open for takeout and outdoor dining. Tables are set up outside along State Street, plus there’s a large parklet with wine barrels for casual eating and drinking. There are also tables set up in an open-air walkway between the food hall and El Alto, Des Jardins forthcoming Mexican restaurant.

Although it’s been hailed as the Peninsula’s first food hall, State Street Market follows the long-closed Liddicoat’s in Palo Alto. While not called a food hall, the downtown “restaurant mall” housed numerous food stands and was a major draw for the area at the time.

Read on for more details on State Street Market and the 11 restaurants and bars opening there.

Bǎo Bèi: Meichih and Michael Kim, whose restaurant Maum won a Michelin star for its modern Korean cooking before it closed due to the pandemic, are back with a more casual and personal project. Bǎo Bèi, named after a term of endearment they use for their young son, reflects Meichih’s Taiwanese roots and Kim’s Korean ones. “The menu is informed by the way we eat at home, where we mix Taiwanese flavors and Korean flavors,” Meichih Kim said. This means they’ll serve a classic pork belly gua bao, the fluffy Taiwanese bun, but with the addition of gochujang, the Korean fermented red chile paste. Another gua bao is filled with shrimp mousse and aioli made with Taiwanese black vinegar and then deep-fried whole, inspired by a Korean fried shrimp toast dish called menbosha.

Once the market is open for indoor dining, diners will be able to enjoy a gua bao with a Taiwanese beer at tables custom designed by Meichih Kim. The tables take inspiration from Korean textile patterns and incorporate the reds and blues of both the Korean and Taiwanese flags.

Along with business partner Ayesha Thapar, who opened Ettan, Gopinathan is aiming to deliver the same culinary ethos underpinning the other restaurants — fresh produce-driven, creative Indian food — but in a laidback setting at a more affordable price point.

El Alto: From acclaimed Bay Area chef Traci Des Jardins, El Alto will meld California and Mexican ingredients and techniques, like a lighter mole made from local apricots and almonds. Des Jardins is best known for her groundbreaking San Francisco French restaurant Jardinière but has also opened several Mexican restaurants, partly in homage to her maternal grandparents, who were from Mexico. El Alto is located across an open-air walkway from the main market in its own space.

Speakeasy bar: Downstairs from El Alto is an underground, unnamed speakeasy bar. The menu, developed by Des Jardins and her team, will focus on agave, tequila, mezcal and whiskey.

Ostro: Across from Bǎo Bèi is a raw bar and seafood market called Ostro, one of Bon Appétit’s stands. Customers can head here for oysters, tuna crudo with cured olives and caviar with toasted brioche.

Murdoch’s: The main bar in the center of the food hall, Murdoch’s, serves classic cocktails, plus bar fare like burgers, mac and cheese and a wedge salad. It’s named after Steven Murdoch, a Los Altan and Prohibition-era bootlegger.

El Alto Jr.: This month-long pop-up is one of two places in the Bay Area to try Impossible Foods’ new plant-based chicken nuggets. Des Jardins, an Impossible Foods culinary advisor, created El Alto Jr., to appeal to children and families. The nuggets, the only dish on the menu, come with shoestring fries and Des Jardins’ grown-up take on ketchup, made with tomatillos and paprika. On the side is a cup of sliced mango, cucumber and other vegetables, inspired by the fruit stands found on street corners throughout Mexico. The chicken nuggets will likely be on the menu for younger diners at El Alto when it opens, Des Jardins said.

Cowgirl Creamery: The Bay Area’s cheese darling will open at the market later this year with Cowgirl’s famed triple cream Mt. Tam and other artisan cheeses.

Banks & Braes: Flatbreads, burgers and grilled flank steak are on the menu at Banks & Braes, another one of the Bon Appétit creations. The Impossible nuggets are also on the stand’s kids menu. In another nod to local history, Banks & Braes was the original name of the area where Los Altos was developed.

Grains & Greens: Head here for dishes like grain bowls and salads, served alongside smoothies. Most of the menu can be ordered as a bowl with barley, quinoa or brown rice, or as a lavash wrap, like marinated Hodo tofu with pickled daikon radish, cucumber, cilantro and a ginger-soy dressing.

Taste, texture and technology are driving the meat alternative space 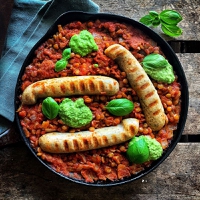