Joey Guffey at Thin-Que-Line in Inman and Bruce Clark at Game Day BBQ in Duncan are both relatively new to owning restaurants, but both are familiar faces in the area.

Clark served as head football coach and athletic director at Boiling Springs High School after a long coaching career in North Carolina. Guffey was a law enforcement officer for more than 20 years, most recently as an investigator with the Spartanburg County Sheriff’s Office.

Now, the two are becoming major players in the area’s barbecue community.

Both Clark and Guffey have been cooking for quite a while, with the transition to cooking barbecue a logical extension.

“I learned how to do it when I was in scouting,” Clark said. “I was an Eagle Scout, and absolutely loved being outside and using the wood, and I just loved it. I think I was pretty good back then. I got into coaching, and coaching takes up all your time. I was into grilling at home, but then I got a cooker. It was gas, and I tried to figure out nine million ways to make gas taste like wood, and it just doesn’t happen.”

Guffey’s transition to cooking barbecue also grew from a love of grilling.

► Mustard barbecue sauce is unmistakably South Carolinian. Here’s how to make it

“I’d wanted to transition from grilling to smoking for a while,” he said. “I like that smoked flavor. One of my friends upgraded his smoker and I bought his old one, a small Traeger. I really liked the smoking process and experimenting with flavors, techniques, and different types and cuts of meat. After lots of trial and error, I started putting out consistently good food.

“Friends and family members started asking me to cook for parties and events and encouraged me to consider opening a restaurant. We did several BBQ competitions and had a really great time at those. We thought that we would continue doing those, and then the opportunity to open a restaurant presented itself.  The timing was right and it just worked out, so here we are.”

During his tenure at Boiling Springs, Clark would cook barbecue for various events, including Signing Day ceremonies. When the Bulldogs played Gaffney for the Upper State championship in 2011, Clark cooked for the team’s Thanksgiving morning practice. He thinks the fellowship that accompanies barbecue is one of the things that drew him to cooking.

“Especially at that point in my life, that was a big deal,” he said. “I did it when we played for the state championship at North Gaston, before I came to Boiling Springs. It brings people together. Number one, food always brings people together. But there’s something about it when you say you’re going to have barbecue, it just makes a difference.”

*I enjoy being creative and putting my own twist on flavors,” he said. “It’s hard to create something brand new in BBQ, but taking something that’s been done in some way, shape, or form and making it my own is a challenge.”

That challenge starts with the day-to-day grind of cooking, which is similar (and similarly strenuous) at both restaurants.

*We have two smokers and use both of them most days,” Guffey said. “My father-in-law, Thomas Jackson, comes in early three days each week and gets the smokers going and puts the long-cook meats on. My son Jack runs the smoker one morning a week and on Saturday evenings, and my daughter Janie waits tables part-time. Sina, my wife, is a teacher, so she is here after school and during school breaks, and I’m here everyday all day.  Sina and I think it’s important to be here as much as possible to build our business and to build relationships with our customers. Wendy Bolt is our full-time waitress and beyond.  She’s been with us since we opened and is an invaluable part of TQL. Tiffany Wood and Payton Brandon round out our staff as part-time wait staff and cook respectively. Our TQL crew works really hard. They care about the business too and that means a lot to us.”

The pace at Game Day is similar, and it’s something that Clark said few can appreciate.

From Upstate down to the coast:South Carolina’s 10 BBQ restaurants you must try this summer

“I don’t think people realize the work that goes into it,” Clark said. “Scott Sweatman is our pit man, and he’ll tell you that the reason we’re successful is that we do it the old-fashioned way. It’s a whole lot easier to put shoulders or chickens or ribs or whatever in a rotisserie-type thing, cut on the electricity or the gas, throw some chips in there and claim it’s barbecue. That’s not barbecue.”

Sweatman’s name might as well be barbecue royalty in the state, as he’s a member of the Sweatman family that runs a venerable and legendary barbecue house in Eutawville.

“I grew up with it,” Sweatman said. “Barbecue meant cooking a hog with coals. I loved it when I came here and Coach said he did things the old-fashioned way. That’s what I’m used to. Coach really took me under his wing and taught me what he knows. He’s very knowledgeable, and he’s really taught me a lot.”

“He’s the exception to the rule,” Clark said. “He hasn’t been with me very long, but I’m telling you, it was a God thing that Scott and I met. This was supposed to be interviewing for a cutting wood-type deal, and it turned into this. He’s been the quickest learner that I’ve ever had, and he’s done an amazing job. We still talk almost every day. But when you start seeing your pit guy getting ill because something’s not right, or being proud because it is, you know you’re getting close.”

Sweatman said that knowledge of the pit and the product allows him to cook by feel.

“I know where the hot spots are,” he said. “Sometimes I can open it up and I can just tell. That’s done. That’s not quite ready. I just know.”

Barbecue 101:What are Lexington, Eastern NC and South Carolina-style barbecue?

Clark said that cutting corners never crosses his mind, even if he has to charge a little more in turn.

“We may be a dollar or two more expensive than your average barbecue house,” he said. “That’s because Scott’s here at four o’clock in the morning and doesn’t leave until mid-afternoon every day. We light the smoker on Tuesday morning and it doesn’t go out until Saturday night. It’s full time. I don’t think people understand, and I don’t think they understand that you can’t be a pit guy if you don’t take a lot of pride in it, and it becomes your baby. When it doesn’t turn out good, it makes you ill.”

That, Clark said, is something that fits right in with his former life as a football coach.

“It’s unbelievable,” he laughed. “You know, I’m telling you, I don’t treat this any differently than I did when I was prepping for a game. It’s all about doing it meticulously, the same way, every time. I tell Scott every day we want the ribs to taste just like they did yesterday. We want to be consistent. It plays right into it.”

Guffey, too, sees the parallels between his former career and his current role.

*Like an investigation, the barbecue process is systematic and requires time, patience, and logic but still allows for creativity and finesse,” he said. “Though the interrogation room is a bit more intense than the barbecue pit, hopefully the nuances still make all the difference in the results.”

BBQ Events:Experience barbecue, blues and even booze at these Southeast festivals

Some of the items Guffey has seen the best results with are out-of-the-ordinary items of his own creation. Those are also related to his former career in a way, he said.

*Law Enforcement Officers almost always gather to eat with their peers on shift,” he explained. “After having policed for 20-plus years, I’ve eaten at a lot of restaurants.  I just try to think about the foods I like to eat and whether or not I can make it work with BBQ.  The lasagna and the bacon wrapped, cheese stuffed, smoked meatloaf have been pretty successful so far.  Most of the testing goes on at TQL since we spend so much time there.  My staff is great about telling me if things need to be adjusted.  I also have some trusty friends and regular customers that I can call in for new items.”

One of Clark’s menu highlights is a more traditional for barbecue, but not for the area.

“Brisket is where Scott has amazed me, it’s the hardest thing you’ll ever try to master,” Clark said. “It’s just not a very good cut of meat. But I think it’s been our draw card. There’s not a lot of places selling good brisket, and I think we have very good brisket. We used to do it just Friday and Saturday, but now we do it every day. It’s been a really good draw for us. We’ve never had a person from Texas come in and tell us that we’re not every bit as good as what they can get there, and that’s pretty good.”

Clark singles out brisket as part of his favored order at Game Day, on a combo plate along with pork and ribs. Sweatman favors the restaurant’s smoked chicken wings. Guffey’s favorites from his menu at Thin Que Line are smoked wings and pulled pork.

Both restaurants have a loyal customer base, and both continue to draw a crowd. That’s something Clark thinks mirrors the barbecue process. Putting in the time, effort, and care to make a good product is also what makes places like Game Day and Thin Que Line successful.

“There’s no secret,” he said. “You can paint BBQ on the outside of your building, but if it’s not good, you don’t last long.”

A Comprehensive Guide to Downtown Dallas Food Hall the Exchange

Sat Jul 17 , 2021
For Dallasites who absolutely refuse to drive north of 635 to explore the food halls of the suburbs, the city is finally now home to its very own one-stop-shop dining destination that boasts more than a dozen eateries. Called the Exchange, the food hall opened its doors last month in […] 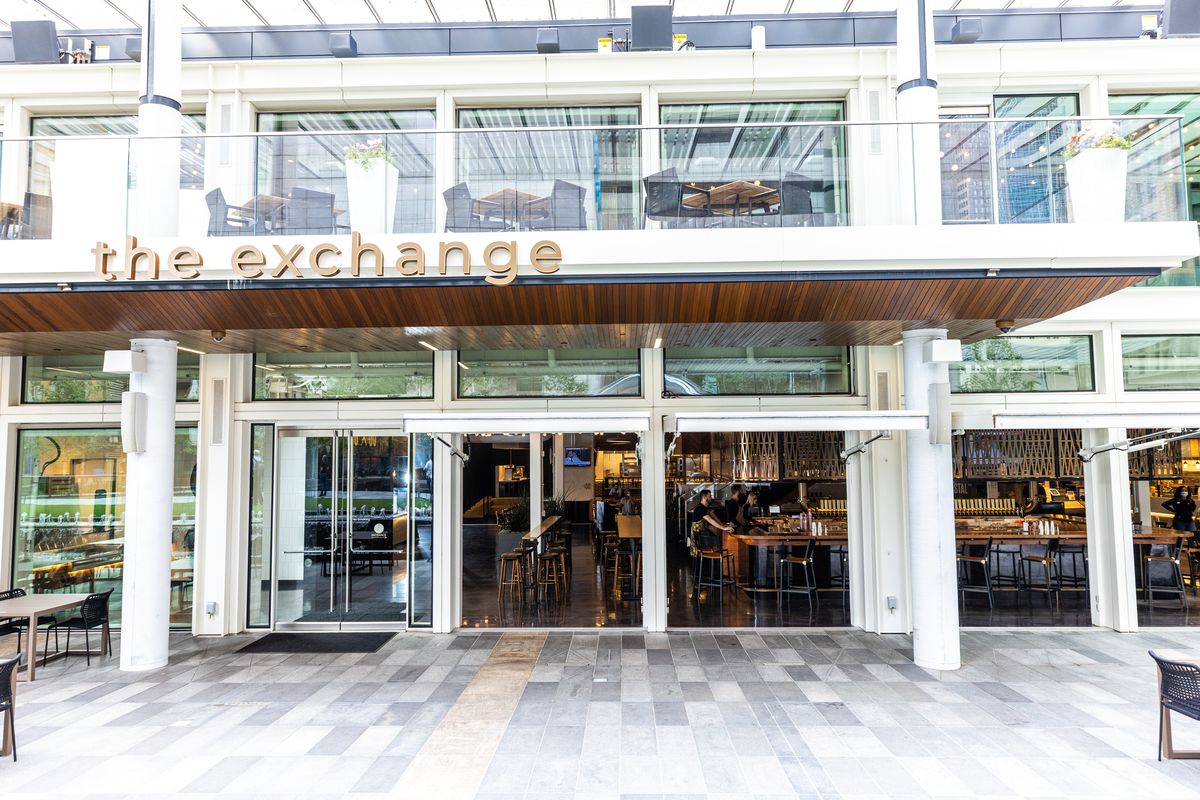